This article surveys the interface and explains how to accomplish crucial tasks, such as defining attributes through annotations.

You have three options to write code in Stencyl:

In Freeform Mode, you can write arbitrary classes. They are not behaviors, so you cannot define attributes or attach them to your scenes or actors. In order to make use of a Freeform Mode class, you will need to call the code from another behavior. 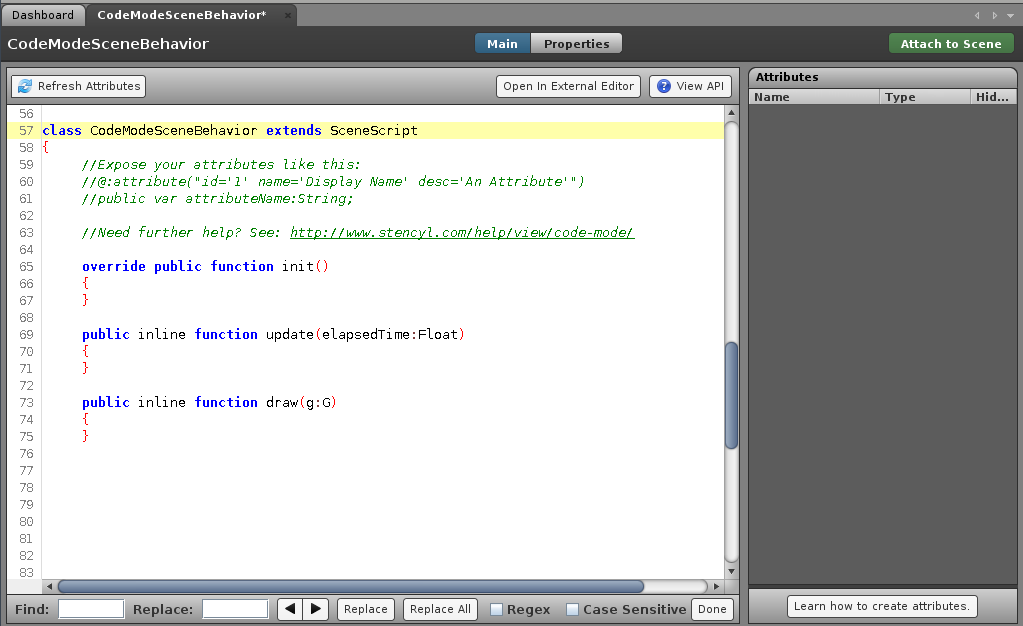 The Attributes Pane stores all attributes currently defined by this behavior. To define attributes, you have to annotate them. Scroll down to the How to Define Attributes section below for further details.

In Freeform Mode you cannot define attributes, so this area does not exist.

In this area you write your code. Syntax highlighting and find/replace are supported. For more advanced features use an external editor. 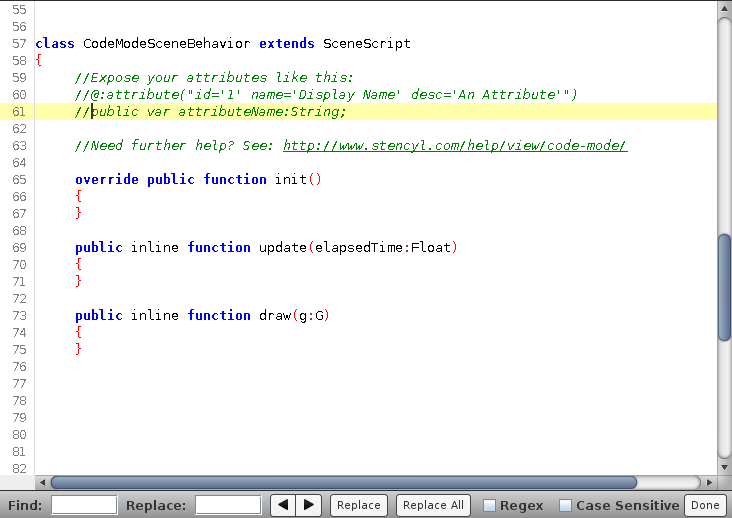 Stencyl plays nicely with external editors such as Notepad and FlashDevelop.

Configure this setting inside Preferences > Workspace. It will open up the editor on demand and auto-sync the changes when you save in that external editor. 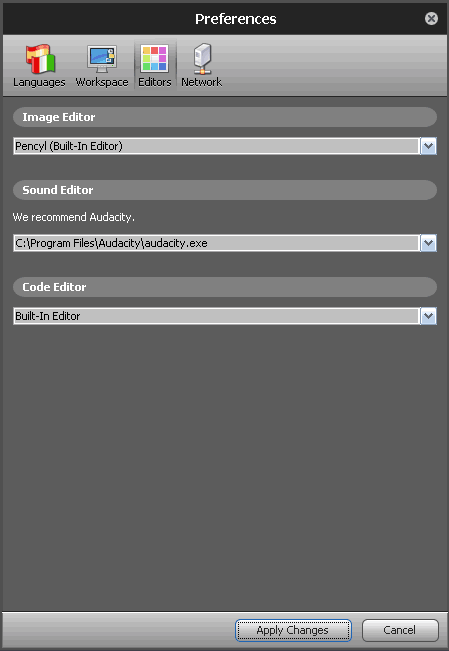 Switching Between Design and Code Mode

At this point in time, we don't support switching between these two modes. A behavior is designated as always being in one or another and cannot be changed after the fact.

If you want to mix the two, you need to make a design mode behavior and stick in code blocks.

How to Define Attributes

In order to expose a class member for a Code Mode Behavior as a configurable attribute, you need to annotate it. This is using the Metadata feature of the Haxe language. The easiest way to learn the syntax is by example.

The type is necessary for attributes that don't have a distinct type in Haxe. For example a Control is stored as a String, the same type used for Text attributes. So to define a Control attribute without ambiguity, you need to provide the type parameter. The parameter is case-insensitive.

Note: After exposing a new attribute to a behavior, you need to reload the scenes or actors to which the behavior is attached for the changes to take effect.

The following types are supported, listed with the corresponding type in Haxe.

Down the road, we'd like to significantly enhance the coding experience. The best way is to improve integration of code with external editors rather than trying to build better (but still inferior) support into Stencyl itself.

For the time being, sending code mode behaviors to an external editor of your choosing is the best way to edit code in Stencyl.

mamad
I need help.
I need a software code zoom in and out playing screen
Example \\ use the middle mouse.
Please help me thank you
Am sorry for my poor English. "
2 5 years, 3 months ago

mamad
I need help.
I need a software code for big and small screen play
Example \\ use the middle mouse.
Please help me thank you
Am sorry for my poor English. "
-1 5 years, 3 months ago

Dyllias86
Can you provide us with a tutorial on how to code in Stencyl? The Drag and Drop system is great but I like to have more control over what goes on.
0 5 years, 8 months ago

Calixto7980
what are the advantage of usin the scripting code, can you declare variables, use data structure an so on ????
1 7 years, 4 months ago

To answer all the questions, you cannot switch between design and code mode. A behavior is designated as always being in one or another and cannot be changed after the fact. If you want to mix the two, you need to make a design mode behavior and stick in code blocks. Which turns out to be quite a popular use case.
2 7 years, 8 months ago

snake13
How do you switch the design to code
1 7 years, 8 months ago

gammaworld1
Suggestion for Code/Design mode:
Make the Code Mode with blocks of code available for the user the input, but the relevant parts show up in Code Mode greyed out. That way the user can decide if he wants to optimize or not.

If not, the user can always select to not permanently alter the code. If would be VERY fun to learn this way :)
0 8 years, 5 months ago

"uint" are unsigned int. They only store positive numbers.

SpanishStencylers
What are "int" attributes?
0 9 years, 3 months ago