Google Play Games Services is Google's equivalent to Apple's Game Center. It is a service that provides leaderboards, achievements, analytics and other features that help you find and retain players for your games.

Step 1: Set up your Keystore (if necessary)

Before doing anything, you must set up your keystore within Stencyl. Consult our Publishing to Google Play guide for details on this process.

Note: If you already have a Keystore (made outside of Stencyl), you must still tell Stencyl about it. Read the guide for details.

Step 2: Set the game up on Google Play

Once you're in, we strongly recommend following the official documentation to learn how to set up your game. You must complete all steps mentioned in Google's guide before continuing.

Note 2: Don't forget to add test accounts to the Testing section of the Google Play Developer Console, otherwise you will not be able to sign in to your game.

Once you've set up your game on the Google Play Developer Console, you're ready to set things up in Stencyl. All you have to do is navigate to Settings > Mobile > Certificates (Android) and do the following 2 things.

Note: The Application ID is a 12-or-13-digit number (View Example). It is NOT the Client ID.

Once you've entered in your Google Play App ID into Stencyl, you must initialize the service using the following block (under Game > Mobile). Use this block as early as possible - preferably in your game's first scene or loading sequence.

After using this block, you'll want to know when the Google Play service has succeeded in connecting with your game or whether it has failed. The following block (under Game > Mobile) lets you check on this status.

Unfortunately, no events exist at this time, so you must manually check for success/failure using this block. What we recommend doing is checking for success or failure every few seconds, as shown in the following example. 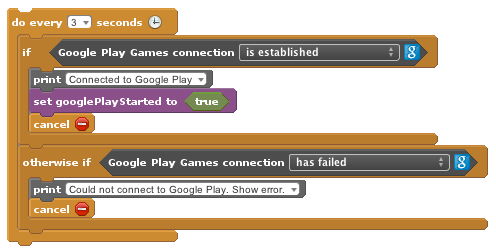 Both Leaderboards and Achievements encourage light-hearted competition between players. Leaderboards are a place for all players to post their high scores while achievements increase your players' engagement by encouraging them to explore parts of the game or take on certain styles of play they may not have otherwise used.

Both Leaderboards and Achievements must be set up on the Google Play Developer Console. Read the following pages to learn about the setup process for these features.

Events are like analytics. They let you collect data from your players during a game, so that you can use this data as feedback to let you improve your game. For example, you can adjust the difficulty level of certain levels in your game that players are finding too hard to complete.

Quests build on top of events by letting you form time-restricted challenges based on event data. Quests are useful to letting you lure players back in your game, if used in conjunction with Rewards, an in-game benefit that is awarded upon completing a Quest.

Events, Quests and Rewards must be set up on the Google Play Developer Console. Read Google's guide on Events and Quests to learn h ow set these up.

Once you have defined Events on the Google Play Developer Console, you can begin capturing and reporting these events in your game. Note that events are reported to Google's servers in batches, so there may be a delay in delivering them.

Quests lets you create in-game challenges for players to attempt to complete within a predefined time period.

Each quest that you define contains a reward value that you can use to offer items or other benefits to players in-game. The reward amount can come back as a number or text - it's just a piece of data that you specified in the Developer Console, so you can do whatever you see fit with it.

Specifically, skip down to Avoiding common setup problems, which list out the most common reasons why Google Play Games will fail to work for your app.

Does support Events (as in Stencyl Events) for Google Play Games?

Not at this time. We'd like to in the future.

Hitting other issues? Ask for help.

If you continue to experience issues after consulting the resources above, please ask for help on the forums (customer area - public area). This feature is still on the new side, so we haven't gotten enough feedback yet to build out our troubleshooting section.

MATHI03
Once upload to get the app id otherwise should not get that app id
0 5 years, 3 months ago

I've published the first real draft of this article.
0 5 years, 11 months ago

It's a subscriber-only experiment at the moment. All discussion should happen here.

violaterr
Did I find this by accident? Really excited for this to be finalized! Great work stencyl team!
0 6 years, 8 months ago

shakeelhadir
I am working on a game in Stencyl now I have biggest problem is this I can't add "Competite with friends" button in my game, I searched enough on internet But fail to got my answer, I saw in games a button mostly it's name is '321' and it connect with google play games How can I add this plugin in my game? I really need immediately help because I already finished my game now only this option is remaing if anyone guide me I will buy stencyl and ready to disturibute my app in play store. Thx
0 6 years, 9 months ago