Some developers use a device's accelerometer to create games a user can control by tilting the device. One famous example is a "labyrinth" game.

You can access accelerometer data through a trio of blocks under the User Input > Mobile category in the Design Mode Palette.

Aside: The "z" value is largely useless for 2D games. It would be triggered by laying the device flat and spinning it around.

The values of each of these range between -1.0 and 1.0 inclusive. Those values represent how much the device is tilted in a given direction. 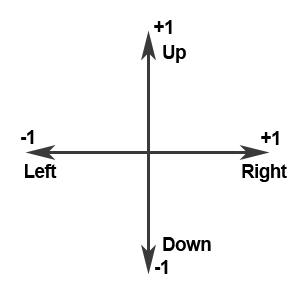 Warning: Do not enable auto-rotation for a game that uses the accelerometer. This will cause the values to flip when the device's orientation changes and will create a confusing situation.

How to Use the Values

To replicate a basic tilting motion for a landscape-oriented game, create a simple behavior as shown in the image below. You can adjust the value -70 to another that suits your needs.

Why are x and y flipped? Shouldn't it be the other way around?

As stated in the previous section, the x and y values are flipped for landscape-oriented games.

If you input 70, the game will act the opposite of what you'd expect.

Full Explanation: As mentioned above, a positive y-accelerometer value indicates a left tilt. However, since this is opposite of how Stencyl works (right is positive, left is negative), that's why the negative sign has to be there.

At times, you may find the accelerometer values to be overly sensitive, leading to jerky motion or motion where none is desired.

To combat this, add some logic to throw out low, absolute values, so that the device has to be tilted beyond some minimum theshold before responding.

Reworked the article a bit for Stencyl 3.0. Explained the values in much more detail.
0 7 years, 7 months ago

champy
Awesome ,I will apply with my game,
0 8 years, 3 days ago

Vanz
when using this accelerometer feature, physics bounce does not seemed to work. Anybody knows about this?
0 8 years, 1 week ago

Most games don't use the Z-axis - it would be triggered by laying the device flat and spinning it around - not practical for most games.
0 9 years, 8 months ago

malospam
Interesting. Maybe some comments on using the z-axis would be good. Much appreciated.
0 9 years, 10 months ago