How Actors Move and Rotate

What good is a physics game if you can’t make things move?

In Stencyl, you can move an Actor in one of three ways:

On top of this, you can rotate an Actor in a similar set of ways:

The position of an Actor is its location within a scene, measured in X (horizontal) and Y (vertical) coordinates. (0,0) corresponds to the top left corner of the scene. 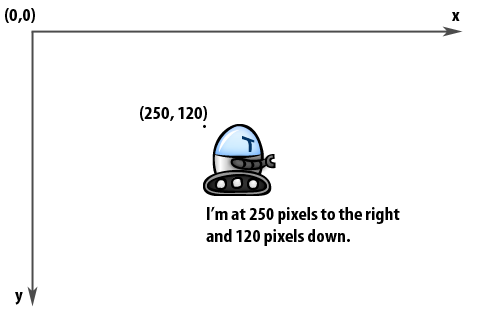 How To: Setting an Actor's Position

You can set an Actor’s position using the “Set X/Y to” block under Actor > Position.

How To: Getting an Actor's Position

You can get the Actor's position using the "Get X/Y" block under Actor > Position.

Note: The dropdown has variants for grabbing the "center" x and y positions too.

You'll find that while setting an Actor's position is a simple and easy way of moving an Actor, it comes with drawbacks depending on the game you're making.

Problems come about if you're making a game that leans on physics. Let's take a simple example.

Imagine that you've got an Actor that moves across a floor towards a wall.

You now test the game and notice that the ball sails right past the wall as if it weren't there. What happened?

Because setting positions is like teleporting. The actor isn't smoothly moving towards the right. He's teleporting to the right in steps, big enough steps that he skips the wall entirely, and no collisions are recorded. 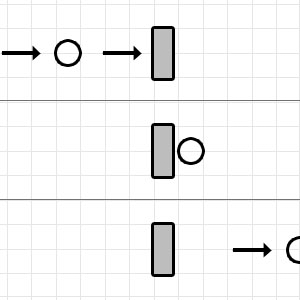 So what's the bottom line? The bottom line is to avoid setting an Actor's position when you're trying to achieve constant motion.

If you're trying to teleport an actor, or if the game isn't quite so physical in nature (an RPG), then setting an actor's position is appropriate.

Velocity is the speed of an object in a given direction.

How To: Setting an Actor's Velocity

Note: The unit of speed in Stencyl is 10 pixels per second.

How To: Setting an Actor's Velocity using Direction + Speed

If you prefer setting the Velocity in terms of a direction and speed, we have a block for that too under Actor > Motion.

How To: Getting an Actor's Velocity

In some cases we may also want to find out how fast an Actor is traveling in a given direction. We can do this by using the “X/Y speed of” block under Actor > Motion.

What is a force? In Stencyl terms, a force is something that pushes an object in a given direction with a certain magnitude (the strength/power). 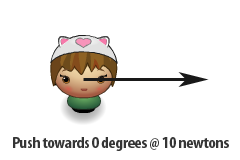 Note: Forces are always applied relative to the Center of Mass.

You can push an object towards a given point using the “Push toward [X, Y]” block. (Actor > Motion)

The "strength" of the force is something you'll have to experiment with to pin down a good value. Bear in mind that like real forces, the mass of the target Actor will determine just how effective your push is. We'll talk about setting the Actor's mass in the Physics lesson.

How To: Pushing towards Angle

You can push an object in a given direction using the “Push toward [angle]” block. (Actor > Motion)

When using any force block, you are given the option to push an object either gently or sharply.

Gently is basically like having a bumper - it applies the force over a longer time, while sharply applies it all at once, like a head-on crash!

The bottom line is that the two methods differ a lot, and you should experiment and see what works for your game. There's no correct answer.

Explained: The difference goes into elementary physics. Recall the concept of an "impulse" and that may conjure up fond memories of crashing cars and bumpers. You learned that the "severity" of a collision depended on how "long" the collision took. This is why cars have bumpers, to lengthen the collision by spreading out the force's application over longer time.

Generally speaking, forces are the most natural way of moving objects. Everything "just works" like it does in real life. You don't need to be explicit about everything.

Velocity is good if you need to maintain a certain speed or require more control over an object's motion.

Example: 4 way motion in an RPG

To sum it up, it's a tradeoff between having more control (and responsibilities) or less. There's no right answer. Just experiment and see what works best for your game.

The direction of an Actor is the angle it's facing. By default, actors have a direction of 0 degrees (facing right). 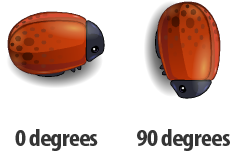 How To: Setting the Direction

This block instantly sets the Actor's direction to the given amount in degrees. (under Actor > Position)

How To: Getting the Direction

Returns the direction, in degrees. (under Actor > Position)

The following 2 blocks (under Actor > Motion) set the turning speed and get it, respectively.

You can also rotate, or twist, an object with a given force using the “twist” block. This is like twisting the cap off a jar.

Much like the distinction between Velocity and Forces, the same kinds of differences between Turning Speed and Twisting apply here.

The following block twists an actor (under Actor > Motion). There's, curiously, no notion of gently/sharply here since Box2D does not provide it.

Telo Production
with the "set x-speed to 10" thing i cant use negative numbers, so i cant move up or left

fliberdoodle
jdhicks, in order to do that you will have to always simulate the actor and use the methods already included in the article
0 7 years, 2 months ago

jdhicks84
Hi guys. I'm trying to have an actor fly in from outside the screen. How would I accomplish this. Please help?
1 8 years, 9 months ago

ArmyofDorkness
i think i figured it out right after posting that comment.

i set the turn speed in a separate event and then told it to twist. seems to work.
0 8 years, 10 months ago

ArmyofDorkness
first off, thanks for stencyl in general.

so, how do I get my enemy to turn slowly to face a direction? I don't want to instantly face a direction.
I tried setting the turn speed at the start of the event, and then turning, but it didn't work.
I tried to tell it to twist itself, but it didn't work.
the only way I can get it to turn gradually is by using a periodic timer event to turn it by one degree every .1 of a second.

Evenkeven
@tramart The only way an object can stop is by applying an "external force" This means that you have to apply friction to your actor, or have it collide with something else to make it stop. If there is no external force the object will not stop its motion. Stencyl makes their physics engine extremely realistic. I love how these articles in section four directly relate to what I am learning in school right now.
0 9 years, 2 months ago

tramart
My objects are pushable, but how do I have them stop? I don't want them flying off, I want them to slightly be pushed like in Pokemon "Strength" pushes over to the next spot.
1 9 years, 10 months ago

Jkniager
@lokesc How are you controlling it? If your using the mouse just set the paddle's X to the mouse's X.
1 10 years, 4 months ago

lokesc
I'm working on a block breaker game now. How do I have the actor drag and slide horizontally as a paddle? Pls help...Thanks!
4 10 years, 4 months ago