Part of game development is creating logic that not only works but is optimized for fast, smooth gameplay that meets or exceeds the 60 frames per second mark. In Stencyl, there are many ways to improve your game's performance. Here are a few common suggestions.

Avoid having too many collisions 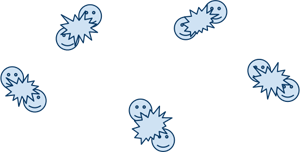 To avoid this, make sure the actors that are capable of colliding have something to do with the gameplay you're going for.

For example, unless you want bullets in your game to act like actual bullets, you can safely change their physics settings so they don't make more than basic use of Box2D when they collide with actors.

You can change the physics settings on the Physics > General page for an Actor. 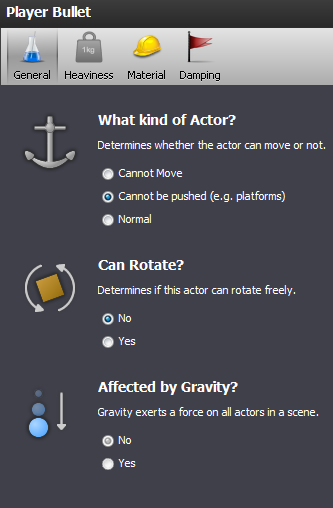 Limit the number of Actors that use Always Active / Simulate

Although it's often helpful for actors to function while off screen (which is what Always Active allows), consider when you really need to do this in your game and when you can avoid it. The more actors that are running all of their Behaviors off screen, the worse your game's performance will be.

Limit the Number of Actors on Screen

This can be tough when you want a game with a lot going on, but if you do need a lot of actors on screen, consider using Images instead for actors that are decorative or "effects-like" in nature.

Images are a limited form of Actor that do not take part in the physics engine, so many more of them can exist on-screen.

Examples of calculations to avoid using in the Always event block include trigonometric calculations, random number generation, calculating the square root of a value, and those involving exponents. While you may not notice any slowdowns on faster systems, on mobile devices and weaker systems, these calculations can make a difference.

Limit Use of Custom Drawing

The Drawing blocks under the Drawing category in Design Mode allow you to draw custom shapes on screen.

Using them takes up a lot of processing power, though, so take into consideration how many custom shapes you're drawing on screen at any given time. Consider pre-rendering your effects instead.

When you draw anything on screen, avoid drawing things on top of one another. Doing this wastes processing power since you're drawing over the same spot multiple times. 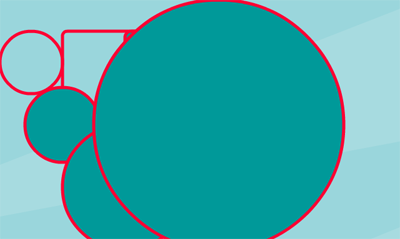 What have you found, in your experiences, boosts performance of your games when you're in a bind? Use the comments area below to share your stories.

LeonMane
i foud out that when testing on android the scene transition "blur out/blur in" slows down the game dramatically,
but the "fade out/fade in" one works much much better
0 7 years, 3 months ago

mikhog
VERY IMPORTANT when using physics: Turn off continous collision unless you REALLY REALLY need it. It shouldn't be checked as default and I'm sure that a lot of the "stencyl is slow"-chatter you hear comes from this simple fact.

Only if you discover that your fast moving actors are missing collisions or handling them improperly and you know what continous collisions are should you mess about with this option.
6 7 years, 8 months ago

HannesRoets
For a letter puzzle game what is best (for android) ?
a) make a png image for each letter
b) make one png image and render the text on the blocks

LudicPixels
Does the number of regions in a scene drastically affect the games performance?
1 9 years, 5 months ago

ExplosionsHurt
Just wanted to note that if a collision does not need to be accurate you can get away with using hitTestObject(whatever) instead.
1 9 years, 11 months ago

CSLewin
What are some sample alternatives to using the Always block? I'm making a pong clone and I want to see if the player has scored by checking if the x-value of the ball is less than the x-value of the left-side player's paddle.
0 10 years, 2 days ago

gigaclon
Number 5 is right to warn against using expensive calculations every frame and to say that one way to avoid that is to put them in to conditional blocks as then they will not be done every frame
0 10 years, 4 weeks ago

gigaclon
The idea for 6 is to only use effects for short lived effects. If you want it to be longer you should just use GIMP to make the changes and put them as another animation.
0 10 years, 4 weeks ago

Jiab0fficial
If the calculations or performed under an "If" statement block which is usually not true (ie. If mouse button is down), does the calculations under that "If" block get ran as well, or are they ignored/skipped until the "If" block's conditions become true?
1 10 years, 2 months ago

carroll6
3-Limit How Often Actors Use Always Simulate. I do not understand what this means.. "always simulate".. is this a scripting function?
0 10 years, 3 months ago