Pick the Platform and press the Test Game button.

You can also do this from the Run menu.

See this article for the steps required to get standalone games running.

Setting up for iOS

Setting up for Android

Print to the Console

It's often useful to record things that happen in a game during testing in a way that can be easily seen. For example...

One quick and easy way to do this is to print these values to the console. Think of the console as a temporary text file that you can write out text to and view from Stencyl's Log Viewer.

If you prefer to see the console inside the game (as was the case before Stencyl 3), use this extension.

How to Print to the Console

Use this block. (under Flow > Debug)

Debug drawing is a special mode in which collision shapes are drawn as outlines. This can help you debug physics-related problems.

The FPS Monitor reports the framerate and memory usage for your game in the top-right corner. It can be toggled from the Run > Enable FPS Monitor menu item.

It's normal for a game to see small but continual memory increases even if nothing is happening. After a while (30 - 60 seconds), the memory usage will suddenly drop back to a baseline level. This is known as garbage collection, which refers to the act of ditching memory that an app no longer has use for.

Summary: Don't obsess over this point. Memory usage isn't a problem unless it continually grows without ever dropping and is accompanied by a choppy framerate.

Ever seen this window? This is a Compiler Error, which is an error that happens when we're unable to build your game into a Flash SWF for testing or exporting. 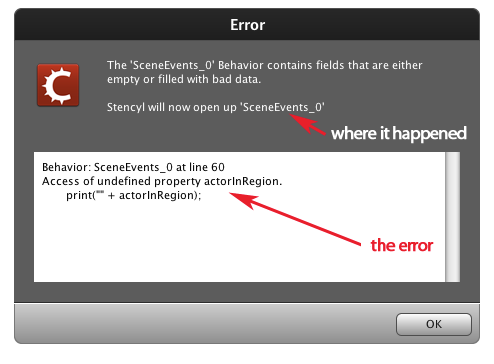 In most cases, if you hit OK, we'll open the offending behavior and highlight the blocks that are at fault.

In this case, we've used the "actor inside region" block outside its context. It has to be used inside its wrapper (something that seems obvious but can easily happen if you're not careful).

What are the common causes of compiler errors?

What can I do about them if I'm stuck?

Runtime Errors are errors that happen while the game is running. They frequently lead to "freezing" or "crashing" of the game. If your game is freezing up, check what shows up in the Log Viewer (View > Log Viewer if it isn't open). You might see this kind of text.

Note: Stencyl 3.0 and later, Flash itself will display a popup with an error of its own with similar information.

By far, the most common cause is referring to an actor after it's been killed.

If you're stuck, ask for help on the forums. Describe your problem, take screenshots and attach your logs.

ZombieGame
I try to load my game, but when I do it just shows the scene and not the tile sets or characters. How can I fix this to see what it plays like?
3 9 years, 9 months ago

marssien
On my English Canadian Keyboard set in Canadian French the key was the one beside the enter key to make appear the console. (`) for the grave accent example: è if this could help someone else.
0 9 years, 10 months ago

rojasstencylman
i didnt realize there were so many different ways to test games. I thought it was just u play it and hope it works
1 10 years, 2 months ago