Tweens. We’re not talking about pre-teens.

Instead, we’re talking about a powerful ability to bring numerical properties of actors to a destination value over time. 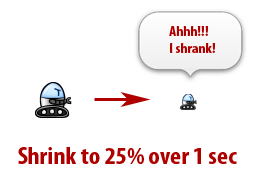 Tweens apply to the following properties.

All Tweens are initiated using blocks under the Actor > Tweening category. 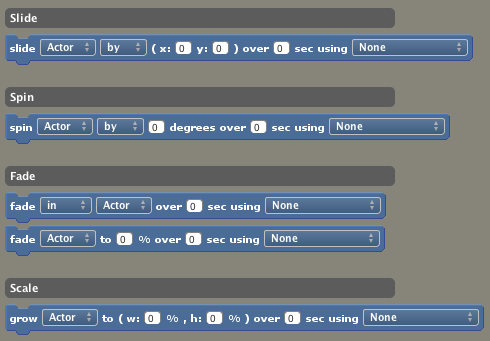 The parameters for each block differ a little, but each tween block requires these 3 bits of info:

You may wonder what the final dropdown in each tweening block is all about. We call this the Easing Function, or Easing for short.

Suppose that we want to slide an actor from point A to point B. Without easing, the actor would move directly from A to B at a constant speed. In many cases, this would look flat and boring.

Easing changes this by varying the rate at which that change happens in accordance with some mathematical functions. It's best to try this out for yourself and see what works best for your game.

Use tweens to add visual flair and polish to your game. How so?

Tweens can make all the difference between a game that feels polished and one that is functional but feels raw.

Next time you play a game, observe where tweens are used. You’ll be surprised to see how pervasive they are!

On occasion, you may notice that a tween falls a little short of its “destination.” 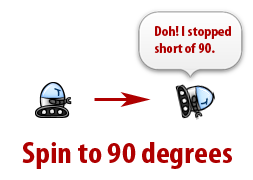 This is particularly noticeable when rotating an actor (by a well-defined amount such as 90 degrees) and expecting it to finish up at the target value. Due to timing imprecision, this is not guaranteed.

We encourage you to employ a workaround in which you manually set the value in the future.

The other gotcha is trying to tween with a 0 second duration. Avoid doing this if possible and use a small, positive value instead such as 0.01 seconds.

When sliding, rotating or scaling actors, do not expect the physics to act reliably during this time.

For example, if you are sliding an actor to the right, and it slams into a box, it may sail past the box instead. Why? Because tweening is directly setting the position (or rotation) of the actor continually. It's difficult for the physics engine to work properly since you are effectively "teleporting" the actor around.

If accurate physics are desired, avoid using tweens and use conventional methods instead.

shylton45
Great tutorial, I always wondered how button effects were coded. Also, thanks for specifying the difference between physics and tweens, I probably would have gotten frustrated over the collisions dilemma.
2 8 years, 10 months ago