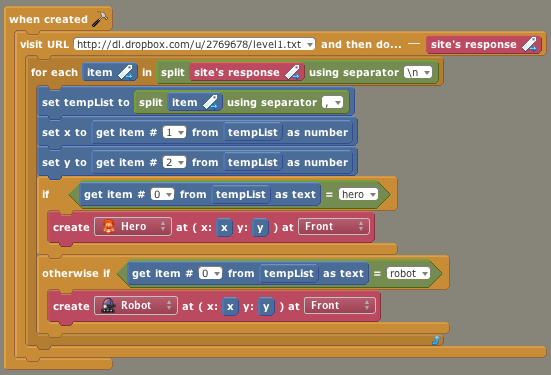 wolf2013
Hi Jon,
you showed how to load values from a TXT file, what about from a PHP file ? Would it be possible to load from array inside a php file ?
1 5 years, 10 months ago

freemanmix
I cant seem to be able to communicate with the server at all through my game can some please just give me a small example of sending text to the server using the visit url thank you.
0 7 years, 1 week ago

Build a script in any language of your choice (PHP, Python, etc.), pass in the variables via GET/POST and have the script query the database. Stencyl cannot and should never be expected to interact directly with a database.
1 7 years, 3 months ago

WarrenTierney
How can I save game attributes to a server? I have set up a php file accessing a mysql database, and I also have a crossdomain file allowing access between websites.
1 8 years, 1 month ago

guicamarotto
how can I upload the highscore of the player in my server, and after, load a list of the top 10 best scores and show on game?
0 8 years, 5 months ago

decletro
Does anyone know how viable this is in a popular flash game? If a game got, say, millions of views, would you need a really good server if your game was constantly using web requests?
1 10 years, 8 months ago