Part 9: Keeping the Ship On Screen

You probably played around with the game so far and noticed something; the ship can go off the screen (and doesn't come back!). Let's fix that, we need to restrict the Ship’s position so it can’t go past the screen’s edge.

Step 66: Create a new When Updating Event for the Ship. We need to add an If and an Otherwise If block inside.

Step 67: For our conditions, we need to compare two numbers; the Ship's position and the left or right edge of the screen. Let's grab the Greater Than and the Less Than blocks from palette. You can find them in the Flow category, Conditions sub-category, in the Equality section. 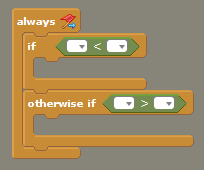 Step 68: As mentioned previously, one of the numbers we want to compare is the Ship's position. We need a block that tells us that, and we can find it under the Actor category, Position sub-category, Position section; visible as x of Self. 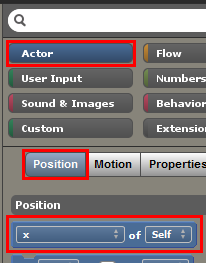 We want to drag two of these blocks out; one for each of our comparison blocks (the < and > blocks). We need one in the left side for both. We need one more change for these two blocks, we want them to say "x (on screen)" instead of just "x". We can click on each one and change them easily with the drop-down menus that appear. 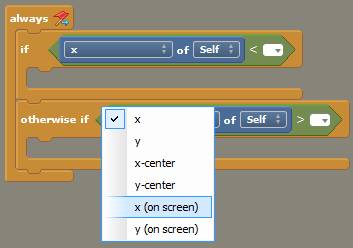 Step 69: Now that we have our first value to compare, we need a second value to compare it against. For our first comparison, we are just going to compare to 0; since an X value of zero is the left side of the screen. All we have to do is type a 0 into the right half of the Less Than block.

The second, Greater Than, comparison will be slightly more complex, however. As previously noted, we have to account for the width of the actor on the right side. Let's get the following blocks and drop them side-by-side in the workspace.

We then need to drag the Screen Width into the left side of the Minus block, and the Width of Self into the right side. The result will be a stack of blocks that looks like the below image.

We need to drag this set of blocks into the other half of our second condition. Be sure to grab the Minus block to move them in, or we might only get one of the blocks inside of it instead.

Here's a image of what we should have so far.

Step 70: The goal of setting up these two conditions is to identify when the Ship has gone too far and has reached the edge of the screen. Since we now have those conditions set up, we can have something happen when they are true.

Given that our goal is to keep the Ship on the screen, we want to reset the position of our Ship Actor so that it is back on-screen anytime these conditions are met. To do so, we need two of the Set X to [ ] for Self blocks; one for each condition. Let's drag a couple out and put them where they belong.

Step 71: Just like with the comparison for our condition, the first value is rather easy. We just need to put a 1 into the block so it reads Set X to 1 for Self. Simply put, if our Ship is ever at 0 or less X position (further left than the left edge of the screen), we are going to force it back to 1 instead. This will prevent it from ever going off the left side of the screen.

Again, like our second comparison for our condition, the second value requires a few more blocks to do what we want it to. In this case, let's get the following blocks. Remember that you can ALT-drag on our existing blocks to duplicate them; you should do this to grab the entire stack out of the comparison.

Step 72: Now we just need to take the above stack of blocks and insert it into the second Set X to [ ] for Self block in our conditionals. The complete set should look just like the image below.

Once you’ve got this new Event set up, test your game. If it’s working, and your Ship stays on screen, it’s time to move on to our next major Event, enabling our Ship to fire the Bullets we created earlier.

DBL
I've done everything in the tutorial perfectly, checked the screenshots to make sure everything is correct, and it doesn't work. First, the ship moves to the far left no matter which key I press. I can then move it one ship's width back and forth by pressing the left and right keys.
0 9 months, 1 week ago

Qomplainerz
When I want to test the game it says "This platform requires OGG sounds".
I've downloaded Stencyl 4, because they've added HTML support.
0 1 year, 6 months ago

Chris24XD
Guys l have made the crash course and it works:
https://chris24xd.itch.io/stencyl-i nvaders-fixed-solution
0 1 year, 6 months ago

Clashedor
I Can't Find The Width Of Self Block And The Screen Width Block
0 2 years, 2 months ago

MysticFirez
Guys I have 2 seconds to live and aghghghhh
-2 2 years, 5 months ago