Use the create-actor-of-type block (under Scene > Actors).

Referring to the "Last Created Actor"

Sometimes, you’ll want to refer to the actor that you just created. Use the “last created actor” option under any Actor dropdown to do this.

Destroying actors is similar to creating them. Use the kill-actor block (under Scene > Actors).

Killing an actor is immediate. Don’t attempt to refer to an actor at any point after you’ve killed it. Especially during timed tasks (do-after, do-every), where it's easy for this to happen by accident.

Events: Knowing when actors get created or die

We provide events that let you control what happens when an actor is created or destroyed. Select one of these events via the “Add Event” button. 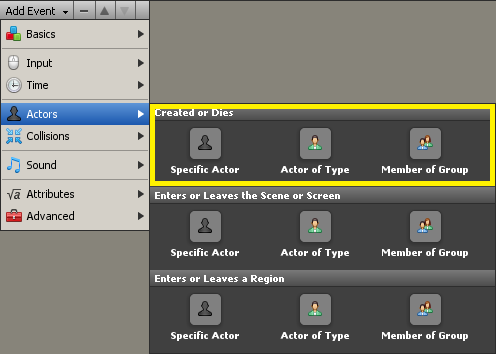 Why not try creating a particle effect using lightweight actors (or images) and along the way, compare its performance to doing this with regular actors?

To create particle effects, just spawn actors rapidly and “emit” them at a random speed and starting position and have them fade out over time. With some experimentation, you can create a fire and smoke effect with ease.

Many games have a mechanic that allows you to fire bullets, but only a certain number at a time, otherwise the game would become too easy.

Why not try creating a bullet limiter that allows the player to create no more than 3 bullets at once?

Hint: Use the ‘when an actor of [TYPE] is created/killed’ event.